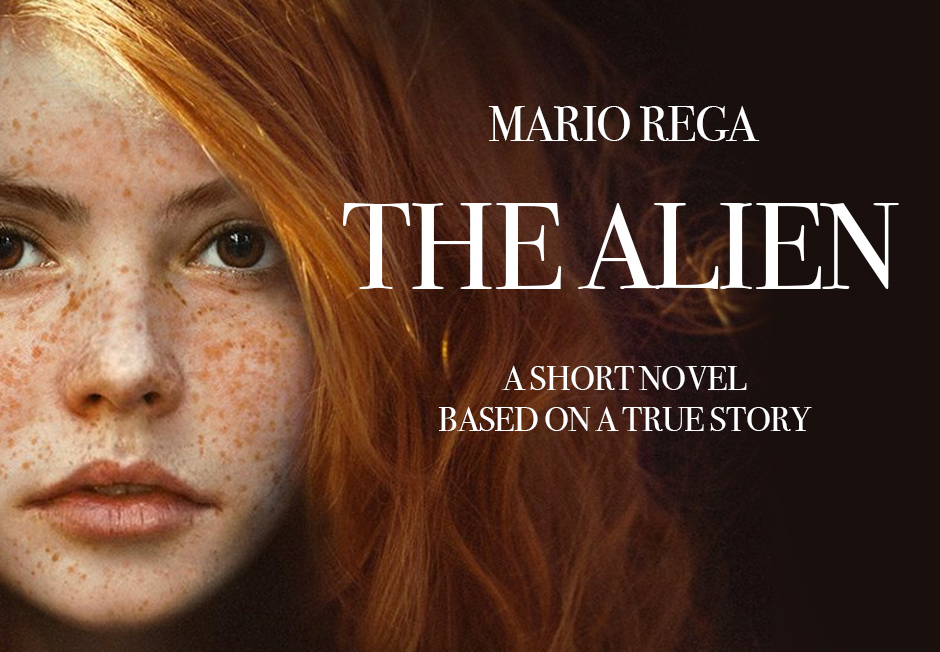 THE ALIEN
by Mario Rega

"Let's try among the people."

Elizabeth looked sideways at her friends wiggle on the dance floor, sweaty and each with their own rhythm. She did not like to dance nor to go to the disco but that evening, after yet another refusal, she had to give in to the wishes of her friends. Sitting aside to prevent anyone from noticing her, she hid huddled on herself in the unfortunate event someone thought of dragging her to the center of the dance floor.

Elizabeth or Lizzy as she preferred to be called is a girl in some respects similar to her peers yet profoundly different. He has freckles on his face, a small tattoo with a dolphin and the fears of every teenager. She is fifteen, a cat, the desire to be a star and hides an incredible secret. That evening he was fully aware of it. Feeling of another world, in a place totally hostile, made her understand even more that she was: different.

"Let's induce it in confusion."

Her friends seemed to enjoy carefree and she, instead, observed the people around her with strange thoughts in her head: she wondered which of them, in another time, had been in exactly the same place where she was. Maybe at the cinema or at the supermarket. He wondered who of them had a really happy life, how many of them turned off the light switch three times before going to bed and how many they wanted to be, like her, elsewhere. Fears, questions and no answers. Yet Lizzy, despite having lived most of the experiences of her peers, knew she was different. She did not like dancing and was an extraterrestrial.

He continued to wonder why he was here on earth and why this strange people, similar to his own, had kidnapped her when she was a child, but never conducted experiments on her. "Maybe it would finally happen later?" He wondered. "Maybe after a 'real' drink." He smiled. He waited anxiously for the place to transform itself into a technological laboratory, to when the walls would open, making room for the cold steel walls of the structure. The "others" would have torn off the skin they wore as a suit to show their true appearance. She really wanted to happen because the time seemed never to pass and until some of her friends had decided to leave, she would have consumed four more fruit juices and would go to the toilet five million times more.

«You too an alien?»
Lizzy whirled around, blanching in the face and feeling her legs soft.
«How, sorry?»
The boy with a serious look and frowned eyebrows was the only one, besides her of course, not to have the t-shirt soaked in sweat.
«I said, are you an alien too?»
«It's not the kind of place I like to be.» He answered without taking the straw from his lips.
«I bet you'd rather have stayed home reading a book or watching a movie for TV. Of those that talk about global catastrophes maybe ... »
«Oh, mum! Of course not.» He countered, straightening his back on the stool. «Better a comedy or a romantic movie.» He added, lying shamelessly.
He loved the catastrophic films. He recalled the last week when he had seen one in which the earth's core had stopped spinning threatening the inversion of the magnetic poles. What a movie idiocy, he confessed. Yet she liked it.

«My name is David.» He smiled and held out his hand.
«Pamela, Hi.»
It was not very good as a name but it was the first that came to mind.
He thought that David, if anything had really been his real name, was nice. He had brown hair and green eyes. Maybe a bit 'too thin but the fact that he was also an alien, however terrestrial, he got him points.
They kept talking for a few minutes, despite the difficulty caused by loud music. Lizzy lied shamelessly another fourteen times. He only one.

He said to come from Charlotte and that she liked horses. He swore to know how to play the piano, to have brought the braces up to twelve years and that his mother had died last year. And these were lies.
David, on the other hand, was not as shy as she was and was evidently used to spending evenings at the disco to party with friends.

«Here they are.»
«My friends, however, should be there.»

«Seriously is your dog called David?» He asked with a raised eyebrow.
«It's horrible, is not it?» She replied, moving a small lock of hair behind her ear «I meant for a dog, not for a human.»
His cheeks began to turn colorful. His shiny eyes.

«How long are you staying in Wilmington?»
«Still one week.»
Liar, there were four. Then he would leave to return to his planet. Suddenly, however, he did not know if it was what he really wanted.

«We'll stay four weeks», he replied «then we'll go back to New Orleans.»
«You told me you were from Chicago!» She exclaimed, thinking she had unmasked him.
«And that's the truth» he said «We moved to New Orleans five years ago.»
Lizzy looked angry. He did not like to talk a lot with strangers and even less with strangers liars. She could lie, of course.

He told her that he wanted to be a doctor and save the lives of children with cancer.
She who wanted to become a star, travel and visit every place in her world and be free. And these were the truths.

Being an alien, besides the unpleasant feeling that one feels in blushing telling the truth, also had some positive aspects. We did not get sick. We were not hurt and did not fall in love. In fact, on his planet love does not exist and people do not mate, certainly as he had read on the earth. On his planet he did not suffer for another individual and did not feel emotions related to everything that can not be related exclusively to themselves. His planet was better from this point of view, he thought, but at that moment he felt confused. Excited. Something in her body was sending her different signals from what her brain commanded.


"Dopamine and norepinephrine at a minimum."

All he wanted at the precise moment when the music went out, the lights stopped flashing and the people disappeared, was that he did not go away. To take her hand. He wanted to try the taste of his lips. He wanted to finally feel part of this planet that has always been studying, analyzing and mistreating. He wished, now that everything was cold and dark, to feel the warmth of a person entering them. In the brain and in the body to shine together with light. He cried inside and smiled outside. It was happening and she was ready. He had been for years but before going he wanted to feel, for once, loved. He did not know what love was but "God" as he wanted to find out that evening.